Table of contents of this page:

Everything you need to know about Viblast Solutions. For more information contact us. 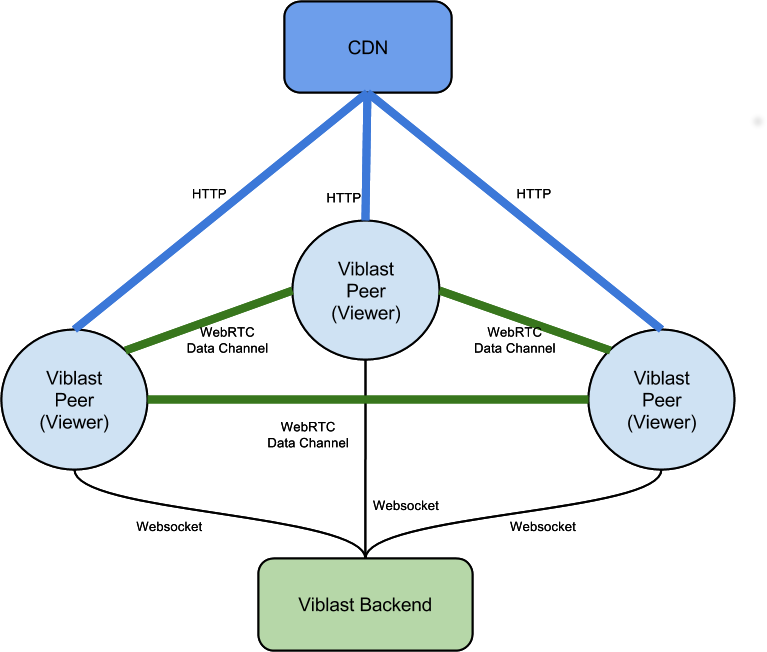 Each Viblast peer (viewer) connects to the Viblast backend using the Websocket protocol. This connection is used for:

It is important to note that the connection of a Viblast peer to the Viblast backend is not used for transferring any video data. All video data is transferred either from the CDN or between peers using WebRTC data channel connections. 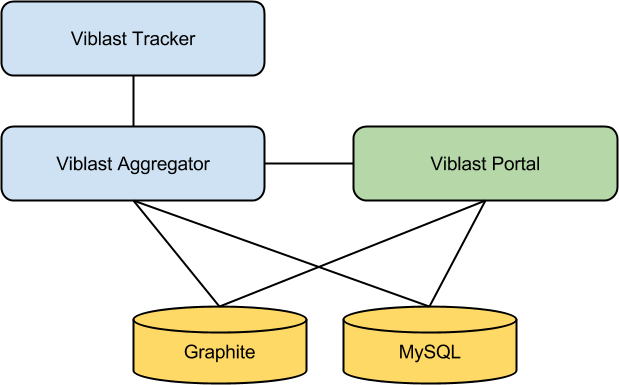 Each Viblast peer (viewer) connects to Viblast tracker using the Websocket protocol and keeps this connection while consuming the video stream. Viblast tracker introduces peers to one another and helps them establish peer-to-peer connections. Peers regularly announce to the Tracker which video segment they are currently playing, the amount of data they have downloaded from the CDN and from other peers, how much data they have uploaded to other peers, QoE data, etc. As a response, the peer receives a set of other peers that are suitable for establishing peer-to-peer connections.

The purpose of Viblast Aggregator is to aggregate data reported by all peers (viewers) into usable and easy to comprehend metrics. Each metric is aggregated as time-series data with 1min resolution. Common metrics collected and stored by the Viblast Aggregator are:

The Viblast backend is deployed on Linux servers. All examples that follow assume usage of Ubuntu 14.04LTS. Support for other distributions is available on request.

For not very large deployments of up to ~20,000 viewers the recommended deployment is single-node deployment. 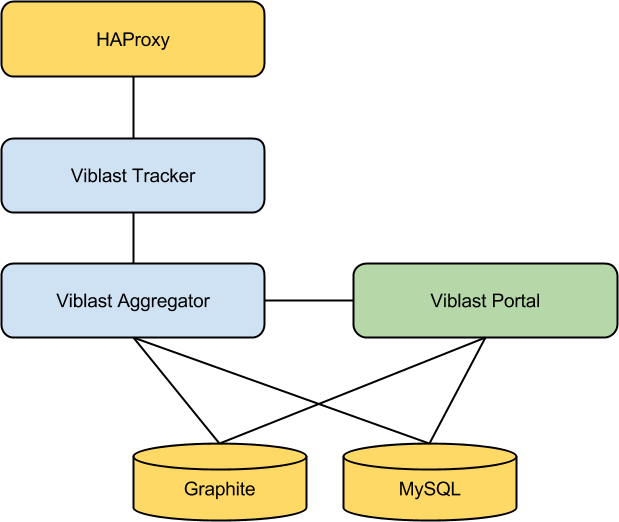 Deploying Viblast backend without clustering support makes the deployment simpler, but has some shortcomings that are discussed below.

Multi-Node Deployment with a Single Aggregator 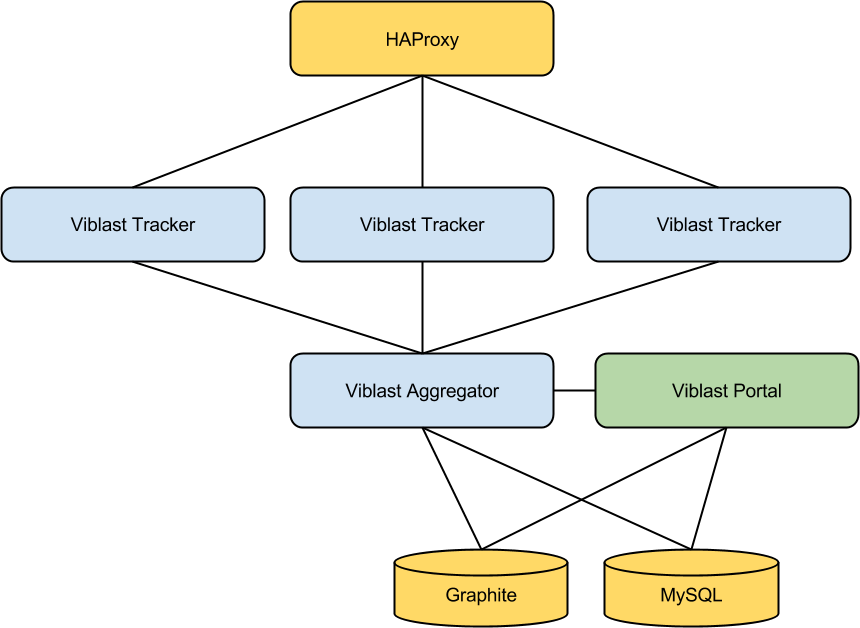 When single-aggregator deployment is insufficient, deployment with multiple aggregators is available. Again, not using clustering support in Viblast's backend simplifies the deployment architecture, but comes with some shortcomings.

In this particular case, the main disadvantage is that each Viblast Aggregator produces independent data that should be additionally aggregated. 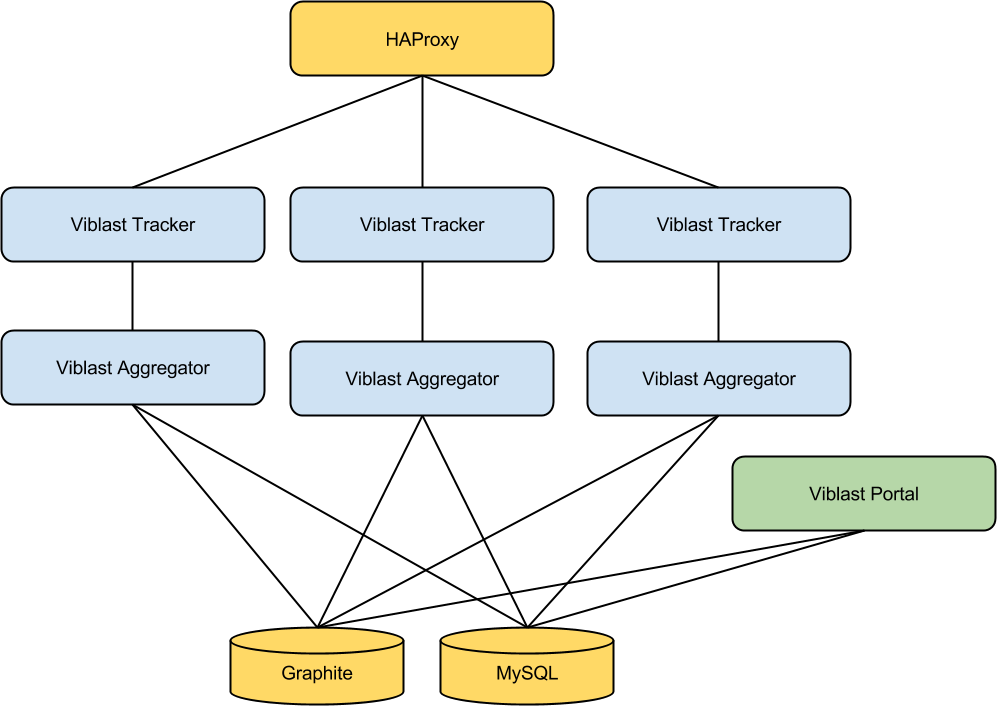 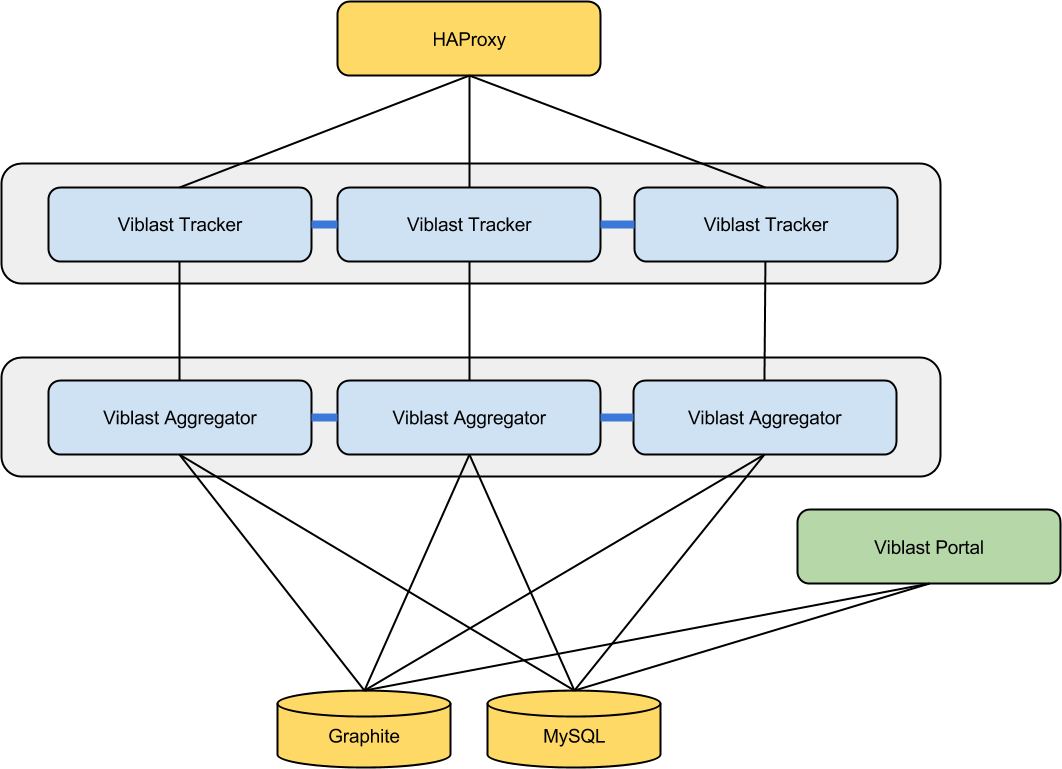 Common Settings of the Viblast backend

The Viblast backend should be run by an unprivileged user. It is common to create a viblast user and run all backend application as that user.

To create the viblast user:

Viblast Tracker installations running production workloads may need system limits and kernel parameters tuning in order to handle a production-suitable number of concurrent connections. The main setting that needs adjustment is the max number of open files, also known as ulimit -n. The default value on many operating systems is too low for Viblast Tracker (e.g. 1024 on several Linux distributions).

To increase the limit of the maximum number of open files, edit the /etc/security/limits.conf and change the lines that specify nofile limits or add them if they are not set:

To install, untar the package into a directory (for example, in /opt). The created directory structure is:

Tracker configuration is stored in vbt/etc directory. The scripts for starting/stopping viblast Tracker are found in vbt/bin directory. By default, the logs are stored in vbt/log directory and vbt/data contains some runtime data about the state of the Viblast Tracker cluster. The location of these directories could be configured.

A fragment of vm.args with default values is shown below:

The first parameter is node name. If the private IP address of the server is 172.16.0.17, then a suitable node name would be [email protected].

The bin directory contains control scripts used to view the Tracker status and to interact with the running executable.

The vbt executable has the following sub-commands:

The vbt-admin executable is used to control the running cluster of several tracker nodes. The command has the following sub-commands:

To install, untar the package into a directory (for example in /opt). The created directory structure is:

A fragment of vm.args with default values is shown below:

The first parameter is node name. If the private IP address of the server is 172.16.0.18, then a suitable node name would be [email protected]. The second parameter is setcookie. This parameter is a shared secret key. All nodes that should be connected to one another must have the same cookie parameter. A suitable value for this parameter is some secret hash. In our example, we will set this to 74b87337454200d4d33f80c4663dc5e5.

Since our aggregator node should be connected to the viblast tracker node [email protected], these two nodes should share the same cookie.

So the fragment of vm.args should be changed to: ## Name of the node -name [email protected]

The other configuration file is app.config. The important parameters that should be reviewed are:

First, Viblast aggregator should know from which Viblast tracker nodes it should collect and aggregate data:

Viblast aggregator stores time-series data into Graphite, so you need to specify where Graphite is installed:

Viblast aggregator stores some additional metrics metadata into MySQL database and needs to know which MySQL server and database to use:

The bin directory contains control scripts used to view the aggregator status and to interact with the running executable.

The vba-admin executable is used to control the running cluster of several aggregator nodes. The command has the following sub-commands:

The first thing that needs to be done is to increase the maximum connections limit. This is done by adding the maxconn option to the global section.

A frontend needs to be configured for the tracker. The frontend must also contain options for increasing the maximum connection limit. All ports that the HAProxy will listen to must be listed with the bind option. If ssl will be used on any of the ports, the needed certificates must be provided as well. Lastly, the frontend must select a default backend.